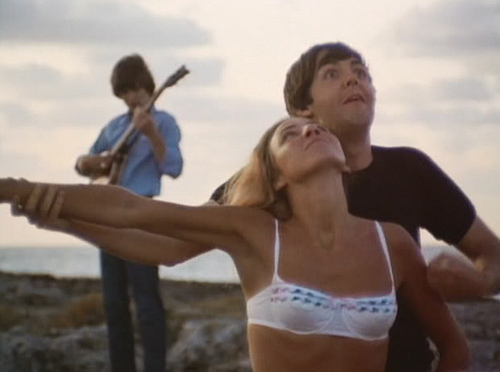 I have two words to say to anyone who doesn’t like the Beatles: Fuck you.

That said, this movie is… wow, awful. And yet hilarious. And awful. It’s like a long episode of the 1960’s version of Batman, without Adam West, or a script that makes any sense. At least we get to watch the Beatles caper around on vacation in the Alps and in the Bahamas. And there’s the incredible music.

There’s a plot, I suppose. It has to do with an eastern cult who sacrifice people who wear a ring with a red glass golf ball on it to the goddess Kaili. Someone sent Ringo the ring, he can’t get it off, therefore he must be sacrificed.

So the Kaili cult chases the Bee-AT-Tills around, led by Leo “Number 2/Rumpole” McKern, a rotund, bug-eyed Australian putting on a south Asian accent.

Also chasing them is Victor Spinetti, a scientist whose British-made contraptions keep breaking down, and his henchman, Roy Kinnear. Eagle-eyed viewers will remember Spinetti from the first Beatles movie, A Hard Day’s Night. You know: the good Beatles movie.

There are a few nice moments in this one though, to be fair.

Two old ladies are watching the Beatles enter their attached-on-the-inside homes. One old lady has to encourage the other to wave at them because they’re such nice boys. “Fame hasn’t changed them.” Inside, the Beatles’ home is one long bizarre flat filled with gewgaws, vending machines, a grass lawn that is being tended by a man using chattering false teeth, rotating book shelves, and so on. It’s delightful to look at.

John and Ringo are in an elevator:
Ringo: What was it that first attracted you to me?
John: Well, you’re very polite, aren’t you?

The Beatles were all (infamously) stoned during the making of the movie, and Richard Lester, the director, didn’t bother to tell them what the damn thing was about either, so all their performances were… what’s lazier than “mailed in”?

The Monkees TV show was based on this nonsense. So there’s another entertainment vehicle with incredible music, and shitty everything else.

With my sluggish Internet connection, it took me two hours, and several restarts, to download this movie. (It’s 1.3 gigs.) And I didn’t even bother to get it in HD. It was 12 bucks from iTunes. Was it worth it? Sure, I’ll  fast forward to all the music videos next time I watch it. They may have been bad vaudevillians, but the Beatles made some of the greatest music ever.