Watkins made the final adjustment on the final component. It was the crowning achievement of his career–the Christmas helmet. It was not a merry helmet. Quite the contrary. The helmet had the effect of blocking out any and all Christmas cheer.

No A Christmas Carol could penetrate the helmet’s sanctity. No holiday music, no tinsel, no Christmas tree… nothing. The user could put the helmet on sometime after the leaves turned brown and could function in American life, but without the distraction of all the holiday cheer. The helmet edited that all out.

Christmas decorations, advertising, music, TV specials–which screamed at him from billboards, newspapers, television, the radio–were all replaced by the music, videos and album cover art of REO Speedwagon. Christmas sweaters, when Watkins looked at them via the helmet’s visor, became REO Speedwagon concert t-shirts. Steve and Edie’s version of “Sleigh Ride” became, via the helmet’s noise blocking software, “Can’t Fight This Feelin’.” The Charlie Brown Christmas Special became a video of REO Speedwagon’s performance at the Indiana State Fair in 1997. The Christmas tree in Watkins’ office became a glowing karaoke machine filled with REO Speedwagon hits. His co-workers were puzzled to see him standing by the tree, helmet on, singing, “Roll With the Changes,” while holding an invisible microphone.

The helmet transformed what was once a painful time of the year for Watkins into a joyous celebration of his favorite band. Instead of seeing Santa Claus in the mall, he saw Neal Doughty sitting in a chair, surrounded by children, playing a Farfisa organ.

In his 35 years of life, he couldn’t remember one Christmas that he enjoyed. Watkins’ parents died on Christmas morning in a fiery car crash coming home from a party at a friend’s house.

At the orphanage, the director put on a massive Christmas pageant every year in an attempt to generate cash. The director demanded military precision from the children, and had them start drilling on the final sequence… a Busby Berkeley-inspired, high-kicking dance of the elves, in which most of the children performed an elaborate can-can while one unlucky child tap-danced as jolly old St. Nick singing “Joyeux Noël” in the original French (“Le Père Noël viendra du ciel, C’est le Réveillon!“… with feeling), the elves joining Santa on the ding-dong-ding-dong chorus… for six grueling months in advance of the show’s opening the day after Halloween. Two performances a day for two months led to their final pyrotechnics-enhanced performance on Christmas eve. If the show didn’t go off exactly the way the director envisioned it, and it never did, the orphans were cut to half rations for Christmas day. Most often, it was Watkins whom the director blamed during his annual Christmas morning rant in front of the assembled children. Watkins had no sense of rhythm and was often a half-step behind all the other children. Those children all turned on him after eating their half-cup of thinned-out gruel for Christmas dinner, beating him with towel-wrapped bars of soap Full Metal Jacket-style, chanting, “We could have had ham! We could have had ham! We could have had ham!” By the time his broken body healed, it was time to start practicing for the next production. 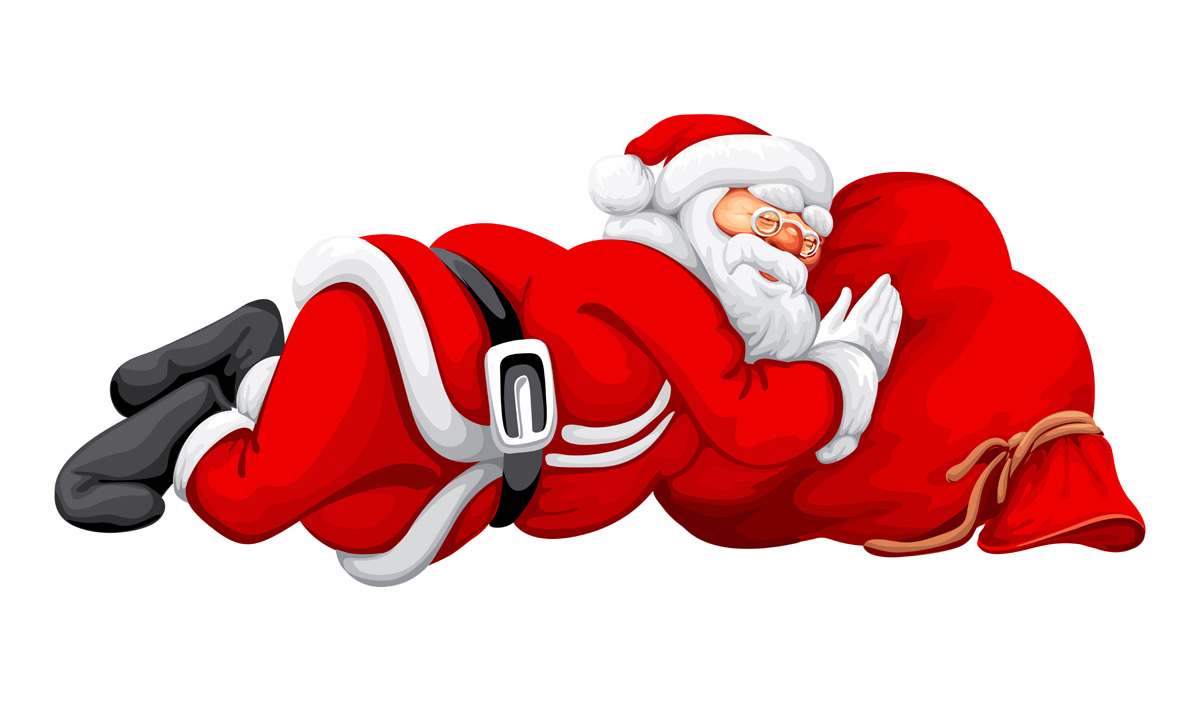 Watkins studied hard and aced all of his college entrance examinations. He got an engineering degree, got a job, and married a quiet woman. The two of them spent their Christmases at his in-laws’ place. Every year at the in-laws’ home was like a reenactment of Who’s Afraid of Virginia Woolf?

His wife was called away shortly before Christmas for a work assignment overseas. He sat alone at his in-laws’, watching the couple unmerrily stabbing away at each other with words, when his cellphone rang. “Have you seen the news?” one of his co-workers asked. He stepped around his battling mother-in-law and father-in-law and turned on the TV. The aging jumbo jet that his wife was on had cracked open at 10,000 feet, discharging all of the passengers into the Atlantic Ocean before exploding. The in-laws stood staring slack-jawed at the TV for a moment, before his mother-in-law turned her rage and grief upon Watkins. “It’s all your fault!” his mother-in-law informed him. “How is this his fault?” his father-in-law asked her. And the two of them continued their squabble, now with renewed venom. He sat in the snow alone outside, Christmas decorations and lights mocking his grief, and silently wept.

On Christmas eve, safe in a soundproof room in his house, Watkins merrily hummed “Keep the Fire Burnin'” while making the final adjustments on the helmet. He’d created a video of the helmet, uploaded it to the web, and received thousands of comments on the page from potential customers who each wanted one customized to their tastes. He had the schematics ready, and an investor was willing to front him enough cash to retool a plant in Longhua, China so they could go into mass production.

A fly buzzed by his head and he swiped at the air. It landed nearby, and Watkins noticed that it was made of metal. Industrial spies were all over the industry. Watkins stealthily picked up a hand laser and blinded the tiny drone. He snatched it up and studied it under a magnifying glass. “Nice piece of tech,” he muttered, turning it over with a pair of tweezers. He shorted it out and placed it in a glass jar.

The elf piloting the mosquito drone let go of the joystick and headed over to the command suite. After enjoying a cup of cocoa and a gingerbread cookie in the outer lounge, he was called into Santa’s well appointed office by the secretary–a dead ringer for Nancy Reagan. One wall was covered over in electronic screens with all the sports betting action from Vegas constantly updated. Another showed NFL games on big screen TV’s. The elf shut the door behind him. It was no secret that Santa fixed games by appearing in players’ bedrooms at night and kneecapping them with a lead pipe Nancy Kerrigan-style. “Only the naughty,” Santa would remind anyone who questioned him. Sports betting was one of his cash cows, along with selling precision factory parts to the Chinese. “What’s the case file code?” Santa asked.

Santa swiped around on his tablet. “This one is a threat level charlie.”

“We’ll have to upgrade it to delta.”

“It’s just one helmet. One man. We can allow that. Treat him like a Jew, a Buddhist, or a Muslim.”

“He’s about to take the helmet to mass production. He has investors, the whole nine yards. And he just grabbed one of our stealth drones. With that kind of micro tech, he could make the helmet into a pair of contact lenses and in-ear headphones. By this time next year, we could have thousands of people blocking out Christmas. In the years after that, who knows? Millions? Billions?”

“How’d he get ahold of the stealth drone?”

“Santa… I was taking all the precautions in the handbook!”

“Santa… I’m sorry! Anything but Tool and Dye!”

The ISS boys popped a festive cloth sack over the elf’s head and shackled his arms and legs. They took him to a waiting helicopter.

“If you want a job done right…” Santa muttered aloud.

The helmet flew off and clunked onto the floor. It rolled over to a man in a suit, who looked familiar, and not in a pleasant way. Santa had most of Watkins’ pajama top balled up in his fists. He lifted him out of bed without any effort.

“This isn’t torture,” the unpleasantly familiar man said. He was studying the helmet.

“He does special projects for us,” Santa said. “Worked his way off the naughty list by setting up Tool and Dye Works in the Aleutian Islands after the Reg the Elf incident. The magic of Christmas keeps his heart beating.”

Watkins’ legs dangled uselessly below him. “Do you want me to halt production of the Christmas Helmet? Is that what this is all about?”

“That ship has sailed,” Santa said. “Your competitors already have stolen your plans. Naughty!”

“Naughty indeed, Mr. Claus,” Cheney said through his trademark smirk. “Shall we enhance this interrogation with a little H-Two-Oh?”

“Not just yet, Dick.” Santa’s eyes twinkled and a threatening ho-ho-ho rumbled from his jelly-belly and ejected out of his beard-encircled mouth. “What we need you to do, Mr. Watkins, is develop countermeasures.”

“Is there an echo in here? Yes, little man, countermeasures! You’ll be working for me now, under the supervision of my number one contractor.” A glowing, rainbow-colored portal swirled in the wall. On the other end, Watkins could make out a massive workshop. An acrid odor wafted out, like metal flakes, acid and grease had all mixed together. The tinkling of Christmas tunes echoed through the vortex, sending chills up Watkins’ spine.

“Tool and Dye!” Cheney sang out.

“Tool and Dye!” Santa sang out. And he tossed Watkins into the vortex.

Watkins tumbled head over heels and landed at the feet of a shivering and half-starved elf. “If you know what’s good for you, you’ll keep your mouth shut and do all the work that Santa requires of you,” the elf said. His face was scarred and his teeth half-rotted out of his mouth. “Name’s Reg, by the way. I ran a meth empire at the North Pole until Santa shut me down. I was once a king.”

“We were all once kings,” Cheney said. “Now get back to work.” They turned their heads upon hearing a hideous scream. “Great! Another elf fell into the gears. Probably will take half a day to scrape his corpse out of there. In the meantime, I have Red Army Industries crawling up my ass, demanding their machine parts yesterday. Show him his workstation, Reg. I’ll be back to check on you. I want progress reports filed on the hour.” Cheney handed Reg the Christmas Helmet.

“Nice work,” Reg said to Watkins, turning the helmet over in his elf hands. Watkins noticed that he didn’t have any fingernails. “Come with me.”

Watkins followed Reg across the factory floor, horrified by the work conditions, frightened for his future.

Reg said, as if he’d read Watkins’ thoughts, “Don’t worry about the future. You don’t have one anymore.”

“Oh good golly have a holly-jolly Christmas this year!” trilled the canned music coming from the speakers overhead.

Five years later, Watkins awoke in a dark alley in New York City, wrapped in rags, a rat gnawing off the flapping sole of his scuffed wing-tips. “Where am I?” he asked, his memory permanently wiped. He stumbled out onto the sidewalk and looked up at all the glowing light as dawn broke on a new day. “What day is this?” he shouted to a man on a fire escape, who was outside smoking a cigarette in the cold.

“It’s Christmas Day, you bum!” the man shouted at him. He tossed him a tangerine.

Watkins fumbled the tangerine and chased it into the street. He caught up with it and quickly peeled and ate it, the sweet juice making his scraggly beard sticky. “Christmas!” he said. A post-hypnotic suggestion released dopamine into his bloodstream and he was happy for just a moment before the crosstown express bus slammed into him.

He walked through a blue tunnel into a bathing light and was embraced by a gentle giant. “My name is Dale,” the giant said. “Welcome to paradise, where it is Christmas every day.”

Serenaded by Bing Crosby, the two new friends walked into the glorious winter wonderland that is the afterlife, to forever celebrate Christmas. Yes, forever and ever.