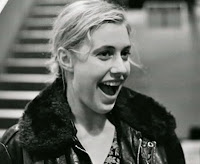 She’s not laughing with you…

You ever find yourself trapped at a house party filled with whiny narcissists who ensnare you in conversation, even as you stare at the door, or a nearby window, plotting escape? Unlike that party, this movie is easy to escape. You click the two little bars at the bottom of the screen, and they transform into a triangle. And then the nightmare freezes on the screen. Exit your browser, and the nightmare is gone.

But me… I’m the kind of Fancy Dan who keeps driving on, slogging through the muck. It would be easy to turn back, but no. I don’t. Kind of like how Frances (played by the lovely, and possibly daft, Greta Gerwig) is a graceless dancer, and even less graceful human being, and yet she keeps on dancing and dancing and dancing and talking, with that lilt of whine in her voice. I don’t want to say I hated the protagonist, but I will say that I was actively rooting for Frances to commit ritual seppuku. “Do it, Frances! Do it because your best friend moved to Japan! And she hates you! And she should!”

Yes, her bestest friend in the whole world leaves her… for a boy! Who wears baseball hats! That’s the worst kind of boy ever. Frances moves in with two man children who imagine themselves to be artists. One writes spec scripts, the other claims to be a sculptor. Their hated daddies are rich, so they can do that, and buy vintage motorcycles and vintage Ray Bans. Then she runs off to Paris for a weekend, because she got a credit card in the mail. Eventually, she becomes a choreographer. Because that’s what people do when they grow up, and not settle for an unsatisfying career as a clerk at the place where your absurd dreams were dashed. Because you don’t have to settle when you’re filled with whiny whimsy. The end.

The montages in this movie all feature the most banal moments imaginable. Art doesn’t have to imitate life, you know. Art can actually be interesting.

I once worked with a man who claimed that Mister Rogers ruined America by telling all kids that they were worthwhile. “Most children aren’t worth a shit,” he opined. “And someone should tell them that… early and often. Give them the cold slap of reality.”

The creator of Frances Ha-like adults… and whimsy.

And now some dialogue…

“I’m so embarrassed. I’m not a real person yet.”

“This apartment is very aware of itself.”

Another good description of the movie: “…Undateable…”

Still game? Head on over to Netflix streaming and watch it. But don’t say I didn’t warn you.