We’re pleased to announce the release of Keith Buckley’s new book, The Orphic Egg Caper. Keith is the newest addition to the Paragraph Line Books stable, although you may remember him from his previous story published here, back when we had the time and patience to publish short fiction online.

Osborne Yesterday, ex-CIA and barely functional private investigator, is headed for rock bottom when a scared graduate student in a world of trouble sends him staggering into a web of lies that will bring him face to face with an old and deadly enemy bent on vengeance. No one gets in Ozzie’s way and nothing is more important than debauchery … with the possible exception of the constant threat of serious brain trauma.

This books a great mashup of a hardboiled detective story mixed with some serious weirdness in a way only Buckley could serve up. An added bonus to Hoosier expatriates such as myself is that it’s set in an early 90s Bloomington.

The Orphic Egg Caper is available for purchase in print and ebook formats at Amazon.com: https://amzn.to/31CnIZM

So we used to have this giant page of all the books we sell. It had pretty pictures and descriptions and reviews and links to amazon.

The thing is, this was driven by a WordPress plug-in. Their business model was that all the links to Amazon to buy the books were affiliate links, and they got a cut of each book sale. That’s fine I guess, because they wrote the plug-in, but of course it would be nice if we got a cut of that, or if we could just price the books cheaper. But that’s another story.

The problem with this plug-in is that, like many other WordPress plug-ins, it was a piece of garbage. And it was basically a vector for virus writers to hack sites, which happened multiple times. I finally had to give up and remove this plug-in, delete the list, and put at the bottom my to-do list of 768 items a note that I should someday fix this.

I have not come up with a good replacement yet. But I did just put up a list of all of our releases. It has links to the Amazon entries for each book. It doesn’t have pictures or descriptions or anything. Maybe I’ll get to that soon, but I’ve got a lot of other things brewing right now.

When I made this list the other day, what amazed me is that it’s been ten years since we officially started doing books for Paragraph Line. And if you include our next release, in that ten years, we’ve put out 23 books, which isn’t too shabby for two guys with full-time jobs.

About that 23rd release – more news soon. I’m up to my eyeballs in production work, so I should get back to it.

Explosive Decompression, a new novel by John L. Sheppard, will be published on Sept. 4, 2016 by Paragraph Line Books.

1. Why we’re on the brink of mass extinction (The Daily Beast).

2. A molecule of water can exist in six places at once (Vice).

5. Dalai Lama: Religion without quantum physics is an incomplete picture of reality (Vice).

Coming Soon, from Paragraph Line Books, The Dove and the Crow… a new novel by Joseph Hirsch…

Meet the Crow: He’s been around for hundreds of years. He took scalps in the time of Cortez and Columbus. He skins men and makes rugs of their hides, lassos of their intestines. Right now he’s angry, and out for blood.

Meet the Dove: Matina’s a whore at the Maison de Joie, with more mojo than you can shake a stick at. It’s been said that, with just one bat of her eyelashes, she can turn pennyroyal tea into tincture of opium.

Meet the Tracker: Dognose Jones, the adopted son of a Cherokee medicine man, has a special gift. He can smell his prey like a bloodhound scenting its chase.

Welcome to the Wild, Weird West.

Did you know we publish books?  Of course not; our site sucks.  Or I should say sucked, because we’ve been making a ton of changes lately.

One of our big updates is our book page. We now have a slick new set of page for our books. Check this out:

The top level page has all of our books listed, with pretty covers and buttons to buy books (which you should) and share them on social media sites.  Click on a book to go to its page, and you’ll see more info, including reviews from Goodreads.

Paragraph Line Books just released our tenth book this year (Jon Konrath’s Atmospheres) and we have many more in the pipeline, so stay tuned for more updates. 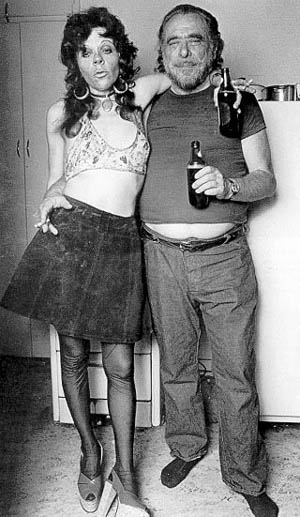 Over at Vice, there’s an interview with John Martin from Black Sparrow about his long relationship, both professional and personal, with Charles Bukowski.

I mean, his public persona is very unlike the man.

Apparently, Hank was courteous, among other things. More at Vice.