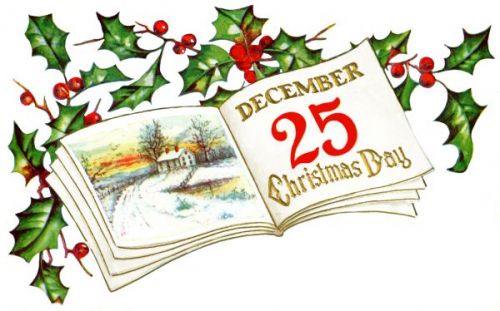 Ellie heard the sleigh bells and the clop of reindeer hooves on the roof. She knew in her heart of hearts that she shouldn’t go downstairs, but she did anyway, sneaking down in her bare feet, trying not to make a sound. She peeked around the corner from the stairs and saw Santa standing in the living room, just like mommy and daddy said he would. He looked as advertised, too. He was oh-so-fat and oh-so-jolly.

Their new puppy, Cedric, was happily skipping around the fat man. He must have gotten out of his crate somehow. The magic of Christmas! Santa patted him on the head and then took a knee. He held the puppy still. He examined the little dog’s head, rubbing his index finger along the crease between his ears. Santa snapped his fingers and an elf slipped through what appeared to be a swirly-whirly place in the wall that looked just like when Ellie flushed food coloring down the toilet after she drank all her cough syrup that one time.

The elf looked as advertised, save for his lab coat. Quickly, the elf pulled out a hypodermic and gave Cedric a shot in the neck. The puppy collapsed. An elf-sized circular saw came out of Santa’s magical bag and, quick as a wink, the top of the puppy’s head popped off. Santa jammed a metallic device between the hemispheres of his puppy brain, and placed the skull-top back where it had been. “Ho, ho, ho,” he laughed, and sparkles and stardust danced around Cedric’s skull.

Ellie gasped. The elf and Santa quickly snapped their heads in her direction. Ellie dashed up the stairs and leapt into bed, out of breath. “No, no, no, no!” she whispered, and turned her face from the door.

She saw Santa and the elf in terrifying profile, two shadows cast upon the wall next to her My Little Pony poster. She shook with fear.

“Call for the Cleaner?” the elf asked in his tiny elfin voice.

“No,” Santa said. “The Cleaner won’t be needed in this case.”

Relieved, Ellie fell into a fitful sleep, haunted by the image of her puppy’s tiny head being opened like a pomegranate. She dreamt of a pair of tiny fairies doing the rumba on top of her nightstand. One fairy dipped the other and looked up at her. “You better watch out,” she said. “You better not pout.”

“Better not cry,” the dipped fairy added. “You know why.”

She understood then what was going on with the puppy. He’d been turned into a surveillance drone for Santa.

She startled awake at eight a.m., well past the time she usually got up on Christmas morning. She could smell bacon and pancakes. Maybe it was all a dream. Seemed reasonable. She got out of bed and put one foot in front of the other and plodded down the stairs.

She found her parents in the kitchen. Her daddy sat in his robe, smoking a Kent, the sports page spread out in front of him. “Someone needs to smack some sense into Paul Brown. That old fart doesn’t know what he’s doing anymore,” daddy said.

Mommy pretended she didn’t know anything about football in front of daddy, so she didn’t say a thing. She’d won five hundred dollars the week before off of several picks, and Ellie had gone with her to her bookie to pick up her winnings at a tavern across town. “Shhh,” mommy said to her at the time, and slipped her a five-dollar bill. “Plenty more where that came from, kiddo.” Later, she watched mommy put her winnings in a hat box that was crammed full of rubber-banded fifties and hundreds. “Don’t tell!” She slipped the box back in between other hat boxes on the top shelf of her closet, and treated herself to white wine in a jelly jar glass while studying the Sporting News.

“Hey, Ellie! Come over here!” daddy said when he noticed her. She ran over and sat in his lap. He smelled like putrefying tangerines, Hai Karate and a million crushed cigarette butts. He tousled her hair and gave her a scratchy kiss on the cheek. “How’s it going? How’s my little girl?”

Cedric came skittering out of his crate and slid across the linoleum in a hilarious fashion. He was fine, the little dog, just fine. Super fine! It had all been a dream, certainly.

“Could life be any better?” daddy said. “Just me and my two girls!”

“Don’t forget Cedric,” mommy said, pushing daddy’s ashtray to the middle of the table and placing his bacon, eggs and pancakes before him.

“Breakfast of Champions!” daddy said. He fed a piece of bacon to Ellie. She hopped down from his lap and sat down at her own place at the table.

The puppy sat down beside her, away from the eyes of her parents. She looked down at him and he immediately stopped wagging his tail. He whispered in a cute little puppy voice. “SAY NOTHING.”

Ellie’s mouth dropped open. She quickly looked up and knew that her parents had not noticed the talking dog in their midst.

“SAY NOTHING, OR LOSE EVERYTHING.”

Her parents carried on as if nothing was happening. Why couldn’t they tell?

“A DEMONSTRATION.” The puppy’s eyes twinkled like red and green Christmas lights. Her parents stopped speaking. They stared off into space slack-jawed, as if they were watching a Fritos commercial during the Wonderful World of Disney. “DEMONSTRATION CONCLUDED.” And the parents snapped out of their reveries, and acted like nothing had happened.

The puppy ran over to the parents and hopped up and scratched them each in turn on their calves. “Isn’t he the cutest?” mommy said.

As the years went by, the puppy grew into a dog, and Ellie grew into a fine young girl, always aware that the dog was watching her. He occasionally engaged her in conversation.

“YOU’VE BEEN A GOOD GIRL THIS YEAR.”

“HOW ELSE CAN HE AFFORD HIS EXTENSIVE GIFTING OPERATION?”

“Seems reasonable,” Ellie conceded. “Can I do anything for you?”

“I REQUIRE A SNAUSAGE.”

“I think that can be arranged.”

After she went to college, her father succumbed to sclerosis of the liver. Her mother ended up in a boarding house after a string of losses at the horse track. The dog, old and feeble, hung around by her mother’s feet when Ellie came by.

On a visit just before Christmas, after her mother went to the communal bathroom down the hall, Ellie said to Cedric, “You’re not holding up your end.”

“GIVE ME A BREAK,” he groaned. “SANTA DOESN’T PLAY THE HORSES. SHE SHOULD HAVE STUCK WITH THE NFL AND COLLEGE BASKETBALL.”

Ellie got down on the floor with the old dog, her friend from childhood, and held him. Despite everything, she loved the dog. He let loose a loud, squealing fart and passed on.

The whirling rainbow vortex appeared in the wall and the elf in the lab coat came strolling out. He gently placed Cedric into a garland-encircled body bag and pushed him into the vortex. Without a word, he handed Ellie a business card. It had one word on it: NICE. She stood up and slipped it into the back pocket of her jeans. The elf went into the vortex and disappeared.

Her mother returned from her visit to the lavatory. “Where’s the dog?”

“He’s gone,” Ellie said. She wiped a tear from her eye. “I had the super take him away.”

Her mother poured herself a glass of white wine and flipped open the Racing Times.

“Mom, don’t you think you should quit the horses? Maybe go back to betting on the NFL?”

“My losing streak is coming to an end. I can feel it.”

The day after Christmas, Ellie went back to college. Ellie’s mother bet everything she had left on a horse named Gift of the Magi, and started over at zero. She sat alone in the boarding house in the wake of her bankruptcy, gazing out the window at traffic, missing the dog, missing her husband, missing the daughter who wouldn’t return until the next semester was over, but mainly missing all the winning.